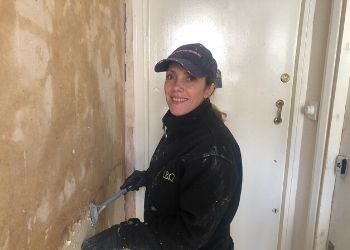 A woman who was told to take childcare and cooking instead of woodwork at school has finally found a job she loves.

Tracie Goldsmith completed her multi-trade apprenticeship in January and is now working for L&Q as part of the fire stopping team.

In 18 months’ time, she will have a permanent contract after learning on the job.

The 47-year-old used to take sick days to avoid her office job but hasn’t missed a single shift since landing a role in the direct maintenance team.

She said: “I have always been interested in this sort of thing, but I couldn’t do it when I first left school because I was told it was not a woman’s job.

“I couldn’t then do it later because it would have meant being at college full time.

“I was caring for my mum and nan for four or five years so after that I was trying to get back into office work, which I didn’t enjoy.”

Tracie, who is an L&Q resident, went to speak to an employment support team member, for help getting back into work, where she first heard about the multi-trade apprenticeship.

“It includes plumbing, carpentry, decorating, plastering, fire stopping and tiling. I was fitting a lot of kitchens for a while but now I’ve come over to the fire team,” she said.

“At school they told me I had to do childcare, cookery or needle work. I wasn’t allowed to do woodwork or metal work.

“I used to do bits and pieces with my dad who was a carpenter so since I was 14 years old I always worked on friends and relatives’ houses. But I was told I couldn’t do it.”

Tracie, who lives in south-east London, left school with no qualifications and was diagnosed with dyslexia at the age of 26.

Now, she gets paid to do something she loves – which she says is the key to life.

“I’m not the sort of person who wants to sit in front of a computer. In my old job, I’d quite often pull sickies, but now I haven’t been off sick a single day,” she continued.

“Every day is different, and I’m always meeting new residents. I hope I’m making a difference to their lives as well.”

Often the only woman on a construction site, Tracie says her colleagues are very welcoming and accepting.

“I’ve had the odd guy in the past say that they didn’t think women should be in this business, but most accept me,” she said. 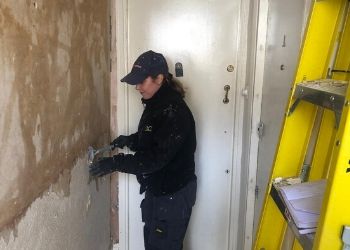 “My advice to other women who want to work in construction is to just go for it. The key to life is getting paid to do something you enjoy, so just go for it. It’s not as hard as people think.

“I hope I’ve played a part in getting rid of gender stereotypes.

“I get lots of comments when I’m walking around in uniform. I get some older ladies that say, ‘go on girl’. I also get some funny looks and some guys do a double take and you can tell they’re thinking, is that a woman?”

As part of the fire team, Tracie installs fire doors, electrical enclosures, and in multi-storey buildings she inserts material between floors to prevent smoke and fire from spreading.

The self-confessed ‘Jack of all trades’ says her colleagues often come to her for help with plumbing and other things.

International Women’s Day, on March 8th, is a global day celebrating the social, economic, cultural and political achievements of women.

The day also marks a call to action for accelerating women's equality.

In 2018, just 12.5 per cent of construction workers were women, according to GMB Union.

Maintenance supervisor, Tom Winstone said: “I have known Tracie since our paths crossed on an inspection of mine at her property.

“I saw the potential in her as she had built her own wardrobes. She was offered an apprenticeship at L&Q and I’ve heard nothing but good things about her attitude and quality of work.

“Tracie has been with my team for around four months and has picked it up so quickly she is now attending jobs on her own.

“She has already been awarded the coveted Gold Gap Checkers award.

“Since she has been with us she has become a vital part of the team and we are lucky to have her.”