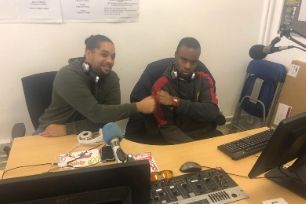 Vital funding has enabled a community radio station in South London to become a lifeline for children, keeping them off the streets.

The Society for the Advancement of Black Arts (SABA) was awarded £9,900 from L&Q.

As part of the project, people from any background have learnt to host their own shows, from the WG Grace Community Centre, in Grove Park.

The team behind the station includes a diverse range of broadcasters, some with special needs or mental health conditions.

Dad-of-four Ryan Bromwell grew up in south London and now hosts his own show, as well as training others.

“I got into this because I just love music. I used to play music around the city while I was doing courier work and I got good feedback,” he said.

“We take on anybody because we’re helping the community. Whatever walk of life you come from, you’re welcome.

“We have some locals and some from further away. It’s a great opportunity for kids to be kept off the streets.

“We have one lad who leaves school, comes in for an hour and goes straight home, and it breaks up the boredom.”

Those who want to host a show are taught how to stream, use mixing boards and how to interview people on air – all free of charge.

And presenters can host whatever kind of show they wish – from music only to talk shows.

“We try to stay away from anything political or religious and we keep it clean but other than that if you have a show idea we can move on it,” he continued.

“My show, Lemon N Lime, is informative and based on what we have gone through. If we’re feeling hyperactive we play hyper music and talk about e-numbers.

“More recently, after Kobe Bryant’s death, we spoke about how different cultures look at death. It depends on how we feel when we walk through the door.

“L&Q’s funding has enabled us to become better.

“For example, we have been working on PCs that are very basic, but now we have a couple of Macs, so we’ve been able to invest and get the station to a better standard.”

One teen who has welcomed the opportunity to learn new skills and build his confidence is 19-year-old Josh Ikediashi, who hosts the lunchtime slot on Mondays.

He said: “I’ve had my own show for 12 weeks and it’s the first time I’ve done anything like this.

“My dream is to be famous and play songs.

“I want to be the best I can be. I would definitely recommend it.”

SABA’s vision is to build disadvantaged communities up by providing a voice to access opportunities that mainstream communities already benefit from.

Community project manager, Monique Hamilton, has been instrumental in getting the station off the ground.

“Since young people started coming to the radio station, we went to the Bruford Youth Theatre in Sidcup. We took six of the students and four ended up signing up and these are children with challenging behaviour, who perhaps don’t go to school, so it’s getting them engaged.

“It really is a life-changing project.”

Previous L&Q funding has gone towards equipment, training, promotion and start-up support for other projects.

“At L&Q it is our mission to create homes and neighbourhoods that residents can be proud of.

“We are thrilled our Grove Park Community Fund was able to help establish the radio station, which is clearly a lifeline in the local community.”

“It brings the local children in and anyone can come along. It’s 24 hours a day and they can fill two hour radio shows,” she said.

“It’s really good for the community. We also reach out to other projects and because of the publicity we can offer with the radio station we can all pull together.”

Sam’s son, Alfie, set up the centre’s gaming tournament, which he hopes will become a monthly event.

Children between the ages of seven and 19 can take part, with three stages – fighting, racing and sports.

“I set it up as there aren’t any around here. It pulls kids in and gets them off the roads,” Alfie said.

“The first one went really well – we ended up with two winners so we had to split the prize.

“Anybody is welcome to take part, they just have to come along to the community centre to sign up.”

The Place Makers fund aims to develop and support local, community-led and place-based projects that reflect the needs of the local area – with grants of up to £10,000 available.

SABA director, John Downie, said: “L&Q’s Place Makers Local fund will enable us to introduce initiatives that bring local communities together. With the radio station at the core of our project, we have further launched various activities that encourage all sections of local residents to engage with each other .”