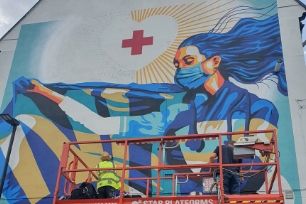 The side of an east London building has been adorned with an impressive NHS mural to thank the health service during the coronavirus pandemic.

Talented street artists from Wood Street Walls painted the image on the side of 37 Addison Road, in Walthamstow, a building owned by L&Q.

“What this mural portrays is healthcare workers, but also many other people working out on the frontline who have previously been forgotten about,” Wood Street Walls founder Mark Clack said.

“This includes carers, paid or unpaid, shop workers and bus drivers – the people who haven’t seen this period as time off.

“They’ve been working around the clock to provide important provisions for us all.”

The street art team have created around 100 murals in and around the Waltham Forest area, over the last five years.

Many of them shine a light on social issues, including homelessness and violent crime.

“We wanted to have something a bit more permanent instead of what is sort of an advertising campaign,” Mark continued.

“mocked up a design to fit on this particular stretch of wall, which we did as soon as we were able to paint safely.

“My team did the painting. We didn’t want to get people out to paint so we said we’d paint it on his behalf which he was comfortable with.

“This is our way of saying thank you – it’s as simple as that.

“It will allow people to reflect about what this period meant to people and the hardship it caused.

“We hope it’s a piece that can celebrate workers and serve as a reflection of this time.”

L&Q, who has more than 6,000 homes in Waltham Forest, have been completely supportive of Mark and his team’s proposals and are hugely impressed with the finished product.

“We’ve worked with L&Q before as we’ve asked a couple of times to use different walls,” Mark added.

“It’s been really collaborative. We just reach out and say ‘this is what we’re planning, do you like this idea?’ and they’ve supported us from the get go.

“It’s been really simple to deal with them.”

Assistant neighbourhood director, Aine McGaley, said: “We’re so pleased that we are able to provide the canvas for such a fantastic mural.

“Our residents are fully supportive of the idea and we are so impressed with the completed piece.

“This is a fantastic gesture and we stand with the rest of the country in thanking and applauding our wonderful NHS and all frontline workers for keeping us safe during these unprecedented times.”