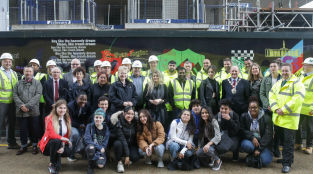 L&Q, one of the UK’s leading charitable housing associations, is delivering 518 one, two and three-bedroom apartments alongside a new community park at The Chain, which is just off Walthamstow High Street and forms part of the regeneration of the St James Quarter.  51 per cent of the new homes (264 apartments) will be affordable and will be available to people living and working in the borough before anyone else.

Created by 13 art and design students from Leyton Sixth Form College, the artwork will enliven the site’s hoardings while the new homes are being built.

The former home of renowned Victorian designer, William Morris, Waltham Forest boasts a thriving arts and creative scene, seeing it awarded the status of the Mayor of London’s first London Borough of Culture 2019.  The event on Friday recognised the talents of the next generation in Waltham Forest, suggesting a bright future for the area’s young artists and designers.

The students from Leyton Sixth Form College, which promotes the importance of creative and cultural education, were given a taste of what life would be like as a professional designer, forming their own mock design agency with L&Q as their client.  Their brief was to create artwork for The Chain which celebrates Waltham Forest and illustrates what makes it a great place to live.  The vibrant designs featured local talent like David Beckham, who was born in Leytonstone.  Several also showcased Waltham Forest’s great cycling connections, reflecting the council’s investment in local cycle networks and the new cycling provisions being delivered by L&Q at The Chain.

As well as being a celebration of the pupils’ achievements, the event launched The Chain E17, marking L&Q’s contribution to the E17 Art Trail.  The trail, which runs from 1 to 16 June, will see more than 8,500 artists and Waltham Forest residents exhibit their work in every corner of the borough, bringing Waltham Forest alive with colour and design for the festival’s fifteenth birthday.

Alongside the Mayor, senior representatives from L&Q, Gill Burbridge, the principal of Leyton Sixth Form College, and Councillor Paul Douglas, the Cabinet Member for Culture at Waltham Forest Council, attended the unveiling ceremony on Friday.  The Mayor officially opened the event at new co-working hub, CRATE St James Street, and spoke to students about the inspiration behind their designs, before the artwork was revealed on site at The Chain.

Liam Duffy, Operations Director (East Region) at L&Q, said: “Walthamstow has a rich art and design history and it’s fantastic to see that cultural legacy inspiring young artists today.  The new hoarding designs champion what makes the area a great place to live, but they also showcase some of its most talented young rising stars.

“The unveiling ceremony also marked an important step in our programme as we open up The Chain to the local community, and we’re looking forward to our next major milestone when we launch the development in Autumn this year.”

The Mayor of Waltham Forest, Councillor Christopher Robbins CBE, attending alongside Councillor Paul Douglas, added: “There’s a real buzz in Waltham Forest at the moment as the London Borough of Culture programme reaches all parts of our borough, offering those who live and work here the opportunity to get involved in creating and delivering a cultural legacy for future generations to enjoy.  The borough is already well known for fostering creative talent and it’s vital that we nurture the next generation, creating inspiring places for them to live, learn and work.”

Kelsey, a 17-year old student at Leyton Sixth Form College and designer of the artwork, commented: “Working in a ‘real-life’ design scenario with L&Q has been a great experience.  I’m so proud of where I live, and it’s been really interesting to pick out what makes the place special for different people.  It’s fantastic to see our ideas come to life on the hoardings.”

Designed by award-winning architects Pollard Thomas Edwards, The Chain is a collection of one, two and three-bedroom apartments in Walthamstow.  Located at the heart of the town, just minutes from the shops, cafés and restaurants on its bustling high street, the development offers the best of modern city living.  The Chain boasts easy access to three local train stations with fast links into the city – St James Street, Walthamstow Queens Road and Walthamstow Central Underground station – as well as connections to the area’s cycling network, offering a healthier, more eco-friendly way to commute.  Vibrant outdoor space at Walthamstow Wetlands is also just over one mile away, allowing people to escape to nature and discover the incredible wildlife on their doorsteps.