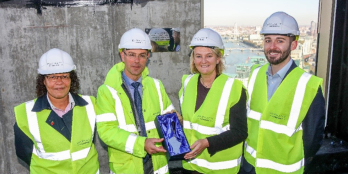 Special guests including the Leader of Lambeth Council have joined L&Q and Barratt London in celebrating the ceremonial topping out of a new residential tower in Vauxhall.

Councillor Lib Peck, Leader of Lambeth Council and Councillor Matthew Bennett, Cabinet Member for Planning, Investment and New Homes for Lambeth, took part in the ceremony to mark the completion of structural work on Barratt London’s tallest ever tower, the 140m high, 37-storey Waterford Point at Nine Elms Point, Wandsworth Road, on the south side of the Thames.

The ceremony included the unveiling of a plaque marking the joint venture between Barratt London and L&Q that has brought a total of 647 new homes to one of central London’s largest regeneration zones. Barratt East London Managing Director, Stephen Thompson, was also on hand to present Councillor Peck with a ceremonial trowel to mark the occasion.

Leader of Lambeth Council since 2012, Councillor Peck’s key priorities are to bring jobs and investment to the borough, to make Lambeth cleaner and greener and to help ensure the health and wellbeing of all residents.

Accepting the trowel on behalf of the council, she told guests how pleased she was to see her vision for regeneration coming to fruition at Nine Elms Point.

The elegant Waterford Point, which features 231 studios, one, two, three and four-bedroom apartments and penthouses, is the final phase of Barratt London and L&Q’s Nine Elms Point, which is spread across seven distinctive buildings, and the culmination of over four and a half years of building work. Waterford Point was designed by prestigious London architects Rolfe Judd and delivered by Broadway Malyan, with a striking geometric shape made up of intricate angles that allow almost all of the apartments to have a private balcony or terrace, making the most of the incredible views over London.

Nine Elms Point is in London’s Zone 1, perfectly located just steps away from the new Nine Elms Underground Station, part of the extension to the Northern Line that will be open to passengers in 2020. In the meantime, it’s only a short walk away from Victoria Line and National Rail services at Vauxhall station. The scheme has delivered a major new Sainsbury’s superstore on the doorstep, and the wider regeneration is expected to create around 25,000 new jobs in the area, with firms including Apple relocating to the area. Along with new housing, the redevelopment of the area will also include new parks, public squares and a linear park stretching three kilometres along the river bank.

Vicky Savage, Regional Managing Director for L&Q, said: "As a charitable organisation, our role goes beyond providing homes and housing services. As a not-for-profit organisation, we reinvest all the money we make into new and existing homes, creating successful communities and providing excellent services. We are a long-term partner in the neighbourhoods where we work and Nine Elms Point demonstrates our ongoing commitment to Lambeth."

Stephen Thompson, Managing Director at Barratt East London, officiated at the topping out ceremony. He commented: “Here at Barratt London we are delighted to be part of such an important regeneration scheme and to see this fascinating area of our capital revitalised and reinvigorated for a new generation of Londoners. It will be a vibrant, exciting community in which to live and work”.