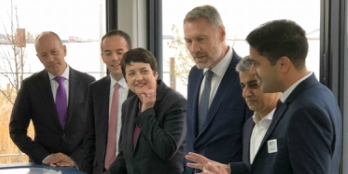 L&Q today hosted the Mayor of London, Sadiq Khan, at Barking Riverside for the launch of his draft London Plan.

Sadiq was joined by his deputies James Murray, Jules Pipe, and Val Shawcross as he outlined his broad-based plan – the first of his mayoralty.

Barking Riverside, a joint venture between the Mayor of London and L&Q, is one of the largest brownfield site developments in Europe, covering 443 acres and creating a brand new neighbourhood along 2km of Thames river frontage. While on site, Sadiq spent time speaking with two of our wonderful graduate site managers Emmanuel Baker and Maria Kaskara on how the development is progressing.

David Montague, Chief Executive of L&Q, said: “The London Plan that Sadiq Khan launched today takes an imaginative approach to tackling the housing crisis. This strategic plan for London will ensure that neighbourhoods across the capital continue to flourish, with the right balance of new housing and much needed transport infrastructure.

“With the right support from City Hall, housing associations like L&Q can get on and deliver the homes this city needs. At Barking Riverside, L&Q is working with the Mayor of London to do exactly that, delivering nearly 11,000 new homes, a new train station and up to seven new schools in London’s only healthy new town.

“This builds on the strategic partnership we agreed with the GLA earlier in the year that will see us deliver 20,000 new homes across the capital – 12,000 of which will be genuinely affordable.”

The plan opens for consultation on Monday and sets out plans on a range of issues including housing, fire safety, cycling, and fracking.