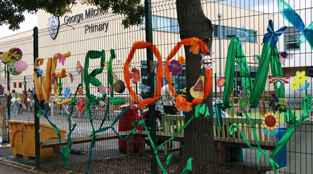 A splash of summer colour came to Leyton this weekend as artwork by children and elderly local residents was displayed at a local school.

The display was the culmination of a two-year art project, organised by intergenerational arts charity Magic Me and funded by housing association L&Q, which has brought together the youngest and oldest people living in Leyton.

The organisers had initially planned a street festival, but with social distancing restrictions still in place three local artists came up with the ‘We Bloom’ project as an alternative.

The Magic Me team, Grace White, Jo Scholar and Irene Pulga invited school children, care home residents and locals to create a unique handmade item to be gifted to someone else in the community, or artworks to be displayed in a pop-up community garden at the school.

The artworks were displayed in the afternoon, and a bike parade displayed some of the art and distributed gifts throughout Leyton.

Samantha Hill, the Head of George Mitchell Primary School, said: “The event was amazing, but I think the build-up was as important. The children were busy making these pieces for the art display and for people’s homes and they were really invested in it. It was good for them to think outside their own little worlds and think about others, as they knew they were making things that would go in other people’s houses.

“The display on the day was completely beautiful, with lots of different pieces made by the older people and the children. There were lots of flowers and creatures made from recycled materials. We had families and local people coming to look at it and they all wanted to stay. The bike parade was brilliant, we all cheered them off and they went around lots of different places locally. They had a lot of people out on the doorsteps waving as they went past, and lots of the kids were on bikes following them as well.

“I think it was great for the kids to see some other faces that aren’t the same faces they’ve been seeing for months. We’re so pleased with the organisers for making it happen and for putting on such a lovely event despite all the restrictions.”

The event is part of the Quality Street Project, which has worked on bringing the residents of Leyton together over the last two years.

Matt Corbett, Director of the L&Q Foundation, said: “Bringing communities together is at the heart of what we do, and we are delighted that the event was such a success and reached so many people in Leyton.”

The L&Q Foundation has pledged £650,000 to help communities during the coronavirus pandemic by supporting grassroots organisations that are helping those in need during this time.

Deborah Mason, Communications Manager at Magic Me said: “At Magic Me we really believe that creative intergenerational projects led by artists can build stronger communities. The Quality Street project has really demonstrated this! We are so grateful to the artists who have taken such an imaginative approach to tackling the challenges of this kind of work during lockdown. It really shows what can be achieved and will hopefully be an inspiration for others.”