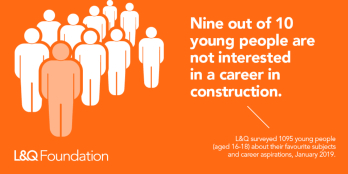 Fewer than one in ten young people would consider a career in construction, even though more than half are interested in subjects that qualify them for the industry, new research by L&Q has revealed.

L&Q, one of the UK’s largest housing associations and developers, surveyed 1,095 16-18 year-olds about their career aspirations.

Around 50 per cent of the young people said that they were interested in Science, Technology, Engineering and Maths (STEM). However, only nine per cent stated that they would consider a career in housebuilding.

The Construction Industry Training Board estimates that 230,000 new recruits will be needed by 2020 to support construction growth and account for an ageing workforce.

There are 167 different careers in construction, and the built environment is the second biggest employer in the country after the NHS. Around half of all construction careers require degrees in a STEM subjects. 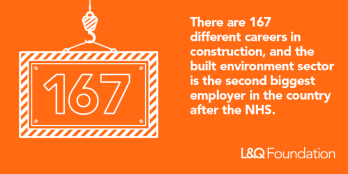 However, the new research revealed that the industry was perceived as challenging and unexciting by students.

The findings were revealed today as L&Q launched its new schools programme aimed at increasing the number of young people joining the construction industry by raising awareness of the wide variety of jobs available.

Learning to Succeed is a £1 million programme that will seek to address the sector’s image issues by offering free STEM education lessons and careers advice to 30 schools in 12 London boroughs. The programme is being developed and delivered in partnership with Construction Youth Trust, the construction industry’s youth charity.

Schools became obliged to provide weekly careers advice to all pupils in 2018, although no extra funds have been allocated. L&Q is the first housing association in the country to offer careers advice and assistance of this kind.

Matthew Corbett, Director of the L&Q Foundation, said: “Construction isn’t just about hard hats and steel capped boots, it’s also about innovation, technology, great design, communities and placemaking. If we’re going to solve our housing crisis, then we need our young people to help – but first we need to increase interest and awareness of the opportunities the industry has to offer.

“The average age of a tradesman on a site is now 45-years-old. And Brexit is looming. We’ve got a serious amount of work to do in promoting ourselves if we’re ever going to fill the substantial gaps in our skills base and make the industry more appealing to younger people.”

Kit Malthouse MP, Minister of State for Housing, said: “It’s brilliant that L&Q are investing in our children, getting into schools to talk to them about jobs in construction.”

“Their ‘Learning to Succeed’ programme will show them the real and rewarding careers they could have as future bricklayers, electricians, plumbers and scaffolders in our capital city, who will be tasked with building the homes we desperately need.”

Construction Youth Trust Director, Carol Lynch, said: “We are delighted to be working in partnership with L&Q to develop and deliver the Learning to Succeed programme. It is through the development of programmes like Learning to Succeed that we can challenge the negative misperceptions of the construction industry and inspire young people to choose a career from amongst the amazing breadth of roles available within the sector.”